You are here: Home / Travel / Meet Zaw May San Win

I don’t know why but I am drawn to op shops. I started roaming op shops when I was in my twenties many years ago like my friends were roaming the streets making it hard for little old ladies to feel safe while window shopping after sunset. In Denmark where I lived at that time the op shops were more like antique shops. It was like entering Aladdin’s Cave with old dresses embellished with beads and gemstones. 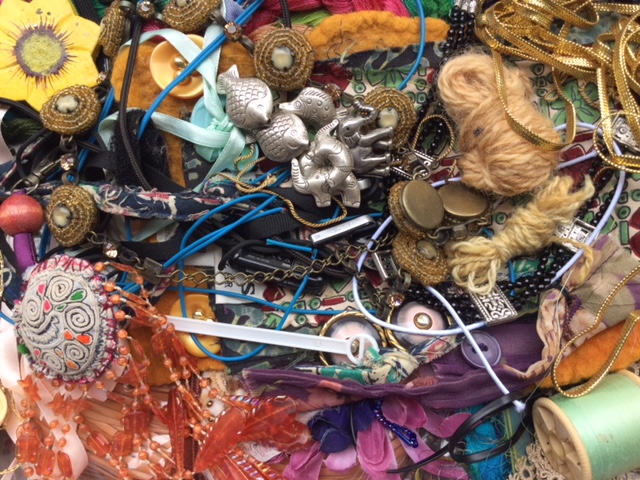 There were piles of ancient Chinese coins thousands of necklaces and other jewellery. Embroidery yarns and sewing cotton. Wooden flowers and I just love Sunflowers. Carved ivory stolen from majestic elephants, stuffed animals by the millions, gold and silver candelabras, sparkling diamonds. The place was full of magic carpets on which you sit and fly to exotic places you only dream about. You name it Aladdin had it!

This day we were in Tennant Creek in Northern Territory an oasis for the dusty but happy traveller. We had been on the road for a few weeks in isolated parts of Australia with only a few shops and none were op shops and I was getting withdrawal symptoms real bad. Peder being a very sensitive fellow with feelings as well understood my problem and he did a quick round of the town and soon found a great looking Vinnie’s for me. I was so pleased and the shaking got less as soon as I walked through the door. It was magic.

I was more than fortunate that day as I found two pieces of swimwear at two dollars each. The nearest beach from Tennant Creek being in the Gulf of Carpentaria at Port Mc Arthur approximately 450km in bee line and you wouldn’t go swimming anyway because of the large population of crocodiles so the swimwear was reduced heavily. Imagine how these creatures managed to survive and they were close to being extinct in the 70ties when they finally got protected in 1972. I think it is awesome to go to the river banks in Bloomfield and ogle at these creatures and know that they are millions of years old. That’s cool just don’t go swimming with them. 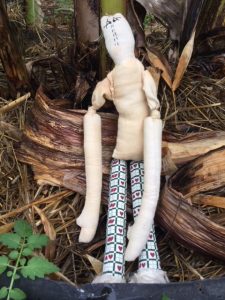 In a basket with chewed plastic Barbie dolls and a crashed Thomas the Tank Engine was a dirty looking cloth doll dressed in a depleted floral skirt. And I love anything floral. She had no hair and her face had a funny sort of longish look to it cross-eyed and a hilarious nose. No wonder nobody had picked her up. She smelled musty and in need of a good bath with plenty of Epsom Salt and lavender oil. How cool is that! I just had both ingredients in the car a good enough excuse for taking her on board.

Peder too did some shopping and bought a kangaroo tail hair intact for his gourmet cooking. 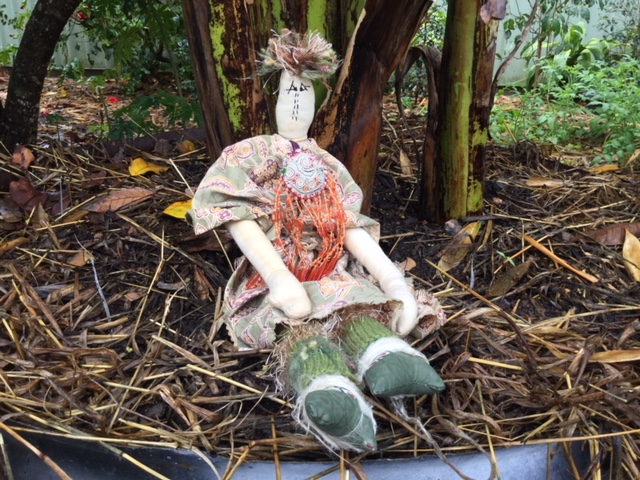 Zaw came to live with us. I put her skirt in the laundry bag. I gave her a warm bath and she came out pretty clean close enough to be presentable to public and able to go to the movies should she fancy that one day. I made her some hair out of green wool and some synthetic yarn which suits her really well. I made her a dress out of an old sarong that I bought in Thailand long time ago faded beyond recognition. As we were approaching winter and being in the desert it gets pretty cold in the evening, all night and until the sun hits you in the morning so I knitted her a pair of green legwarmers. Added a pair of dark green shoes so she could get lost in a raised bed with mustard greens and shallots was just a great idea I got. And why has the elephant red eyes? So that it can hide in a paddock of strawberries!

So how did I know her name? Well whoever asked the question I can only say that it is an interesting question and the story behind her name is greatly remarkable. Remember the depleted floral skirt she was wearing when I first got her. Before I was doing the next load of washing I checked all pockets for tissue paper, rusty nails, crystals and dust and in the tiny pocket of her skirt was a tiny piece of paper with a few words written on it. Zaw May San Win. It did not make any sense to me then but I kept the piece of paper just in case the cloth doll could tell me what that was all about.

The cloth doll did not say much and what escaped her mouth were more like sound or chanting but no words. Suddenly it accrued to me that she could be from a different country and not an Aussie girl from Northern Territory. Language is indeed a funny thing especially when you can’t understand each other you then have to listen in a different way. So I started to study her body language. How she walked around, how she was sitting and lying down. How she performed her morning ritual. To cut it short I kept a close eye on her. She is a very graceful person, shy and withdrawn and therefore not much eye contact with us. She is radiating peace and harmony and is of great joy to all in our house hold. 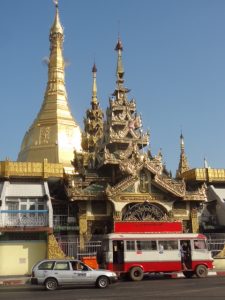 One day sitting at the computer writing this story Zaw sitting opposite me it dawned on me that she could be from somewhere in South East Asia. In that instant the energy changed between us. She was communicating with me on a mind level and I was suddenly seeing with my third eye. The information channelled to me was that she was a misplaced young girl from the Karen people who live in a refugee camp on the border between Thailand and Burma today called Myanmar. Yes we have been to Myanmar. We went to Rangoon and we liked it.

Zaw arrived in Australia on the Magic Carpet I saw in the Aladdin’s Cave when I was still in my twenties. Gosh what a unique coincident I thought. That is a bit of a journey sitting on a flying carpet all the way from South East Asia to Tennant Creek probably 5500km in bee line. Can you imagine what the indigenous people of the Tanamin desert would have thought when they saw this cloth doll on a flying carpet approaching the airport at the speed of the light?

She kept channelling telling me that the words on the piece of paper were her name.  She told me her name means Yogi Maiden Moon Bright. Have you ever heard such remarkable name before? Neither have I. That’s such a breezy name! I wish my name could be something like that but Ulla originating from Sweden and means Bear!

I told Zaw communicating using my mind that I would do all I could for her to be united with her family. We went back to the op shop in Tennant Creek and there on the shelf with dog and dingo blankest was the Magic Carpet but no one knew. I bought it and a final close-up look revealed that this was indeed the carpet on which Zaw arrived in Australia.

We sat Zaw on the carpet with a bit of food and drinks for her return trip to her people. We were only hoping that she could be united with her mother, father and any possible siblings. We took her to the airport and got permission to go on the runway. We punched in the longitudes and latitudes of her hill tribe village on the GPS stuck it on the flying carpet and away she went. 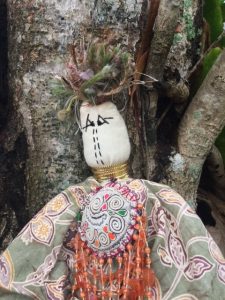 For years Zaw has been in my dreams and when I wake up with my heart racing I wonder if she found her way home. I mean being on a flying carpet is ok if you are sitting on it on the floor but in the sky! It’s a completely different kettle of fish. There are hundreds of planes up there at any time of the day in the same corridor and there are so many corridors that you could easily get lost. And she is only a young girl. Also I wonder if we punched in the right navigation coordinates?  I never was told how to use a GPS! Now why did we let her go on the flying carpet? Could she not have stayed with us for the rest of her life and be happy?

One beautiful morning the sky and trees full of birds, butterflies and ladybirds a tiny piece of paper fluttered to the ground just in front of me. I picked it up. I recognised the writing. It was a message and an invitation from the Karen people to come to visit Zaw.

Can you imagine the joy in our camp? She made it home! We were so excited. I was crying of happiness. I never thought that I could have that many tears in my eyes!  I think all my readers will be crying as well. Imagine being lost and away from your family that you just love so much. Imagine living in a different and strange culture all on your own. You can’t speak the language and you don’t know what good or appropriate behaviour is. Imagine never returning home to where you belong. It is unbearable and yet there are so many people out there in the big world that will never make it home.

We got ourselves organised. We bought tickets and flew to Thailand landing in Bangkok to change plane to go to Chiang Mai. At Chiang Mai a driver was waiting for us and he took us straight to the village of Zaw’s people.

The reunion was phenomenal. The chanting went on all night and we had purple sticky rice for breakfast. The Karen people are very colourful and beautiful people. The weaving they do is very unique handed down through generations. We had a ball and got to know the family really well. Even a great party must come to an end. With grand experience and enjoyable memories packed in the suitcase we went home full of joy and love knowing that our very own Zaw also made it home.