You are here: Home / Travel / How The Rats and Tommelise got to travel with us

One year before we left home getting ready for a 10 months trip overseas there was much to organize. The list was so long that sometimes just looking at it made me exhausted. But we got all the important stuff in place. Peder even got his cataract removed so he could see where he was going.

Meeting with our dear craft friends at Lake Eacham for the last time before takeoff one of the Coffee Droppers (yes that is what we call ourselves as we have a reputation of dropping coffee in books to make forever lasting stains for others to enjoy and be annoyed about. It is a great way of being remembered by many a folk) said to me to bring a mascot for the trip and take photos of it as we visited special places around the world. Well the idea sounded exciting. I never thought of this before and what creature to choose for a mascot?

The following week during a last visit to an op-shop roaming the boxes of lace and ribbons I could hear this tiny voice crying somewhere amongst the thrift trash. I look around; search high and low and finally I found her. A tiny little cloth doll. She was in a smelly box with cockroach droppings no wonder she was crying being left alone in such a horrendous place. I took her in my hand and cleaned her face and spoke softly to her. She told me her story.

I decided right there on the spot that this tiny and so beautiful and fragile girl was to be my mascot. She liked the idea straight away. She said she would love to travel the world and what better company than Peder and me.

Because she was so tiny I named her Tommelise. She is the main character in one of the many H.C. Andersen’s fairy tales. Her English name is Thumbelina. She is the one who is going to marry a mole and she doesn’t want to because he lives in the ground in the dark and she loves the sun.

We travelled through Europe and one day we reached Denmark one of the main destinations for the trip. My best girlfriend was about to shift house so we offered our help on request. During the clean up and shifting stuff we came across three large black rubbish bags full of stuffed toy.  Her two daughters got the chance to select five toys each the rest was to go to the local op-shop. In amongst these entire lovely and some weird stuffed animals and dolls were two rats a small and a large one. The two daughters didn’t want to have anything to do with them. They didn’t like rats at all because they thought rats are dirty filthy creatures caring epidemic disease.

It would break my heart if the rats had to leave the family and maybe feel lost in another op-shop for donkey years to come before some poor refugee would pick them up and give them a proper home. The rats were so cute that you could only fell in love with them. So I picked them up and took care of them while my heart was melting away. They were so happy to be out of the black plastic bag. They were suffering from three years of suffocating which is a long time even for rats. They were looking grotty and starved. I gave them a bit of a cleanup and Peder started cooking up a storm.

Before we left Denmark we were all up to scratch and on our way to more adventures. The Rats never looked back and we became a travelling road team looking for any adventure around every corner of the country side. The Rats took to Tommelise as two old women in a kitchen on fire and away we went getting fire hoses connected to the taps. 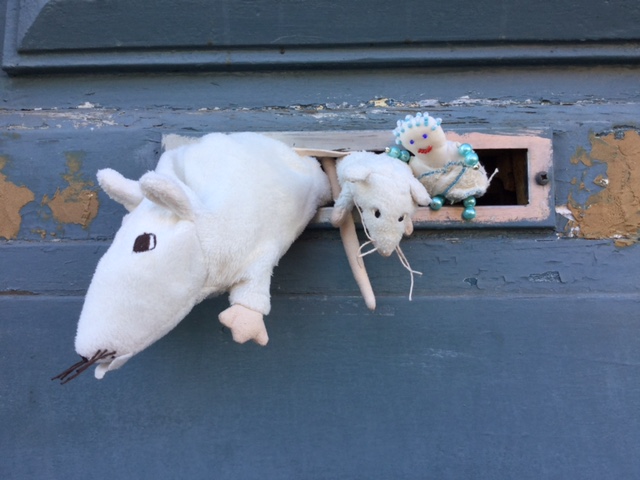 You might have heard about the rat catcher “The Pied Piper”. While we were travelling in Europe especially in Germany I was worried because “The Pied Piper” is a fellow who is hired by the local councils to lure all the rats away from the communities.  He is from Hamelin in Germany and his family has been rat catchers since the middle Ages. He has a magic pipe and one story goes that when the citizens refused to pay for his service he retaliated by using his instrument’s magical power on their children leading them away as he had the rats.  “The Pied Piper” only works at night time so I felt that the Rats were safe in the daytime but had to make sure they were in bed in the car as soon as the sun was setting. The rat catcher is dressed in multicoloured “pied” clothing. If you have a drawing or even a photo of “The Pied Piper” please share and send to: Ulla P.O.Box 1672 Mareeba 4880 QLD Australia.

Can you imagine a plague of rats? Well both Peder and I can because one year long time ago we travelled in China. We had come to a steep slope on the Yellow River leading down to a jetty where the boat was moored. We had booked a four days and three night’s boat cruise.  Standing looking at the polluted sky and the run down boats we realised that the slope was alive with rats. After two days on the boat we even realised that we had rats on board and they came to visit our cabin in the night time stealing our fruit and bread rolls. At least all the rats stayed on board which is a good sign that the boat will not sink as the rats usually leave a sinking boat as the first creatures amongst us.

The Rats and Tommelise loves to be a part of the picture and they loved the street art in Melaka in Indonesia so much. 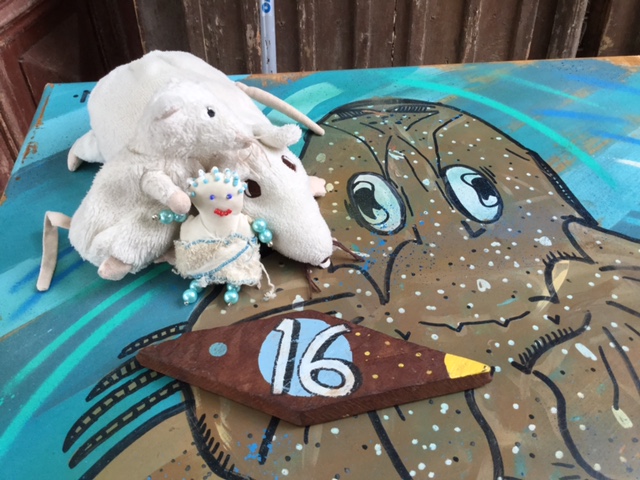 Within a short time they could master noodle soup for breakfast in Bangkok but they did struggle like us with the chop sticks. However we never went hungry. 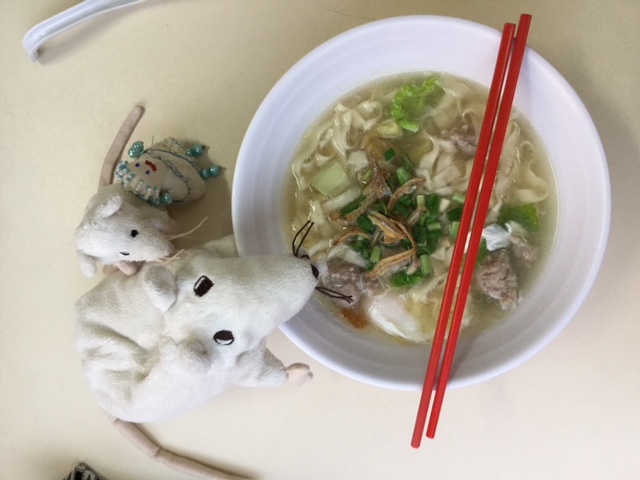 They were happy as pigs in mud on the pier in Ajaccio on Corsica. The Rats and Tommelise were dying to go on a boat trip but we stayed on land as the sea was rough once you went through the gap. Ajaccio is the capital of Corsica, port city on the extremely rugged isle’s western coast. And guess what folks? This is the birthplace of the French Emperor Napoleon Bonaparte born on the 15th of August 1769. 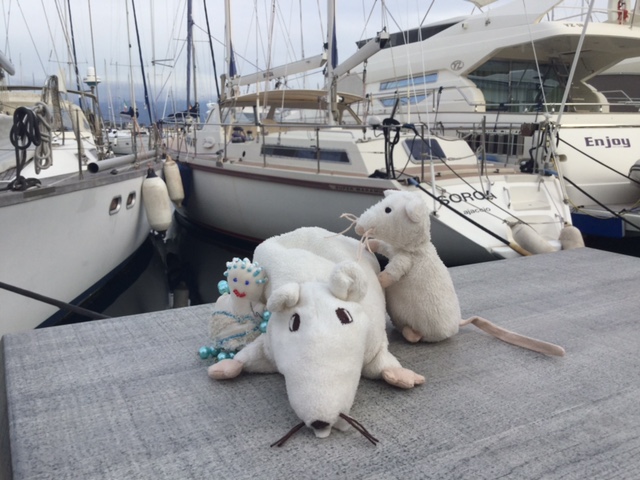 The rats and Tommelise were hanging out for news anywhere we went and always wanting new adventures. They were wearing sunglasses like any other tourist and so they blended in just perfect and no one took any notice of them being Rats and Tommelise. 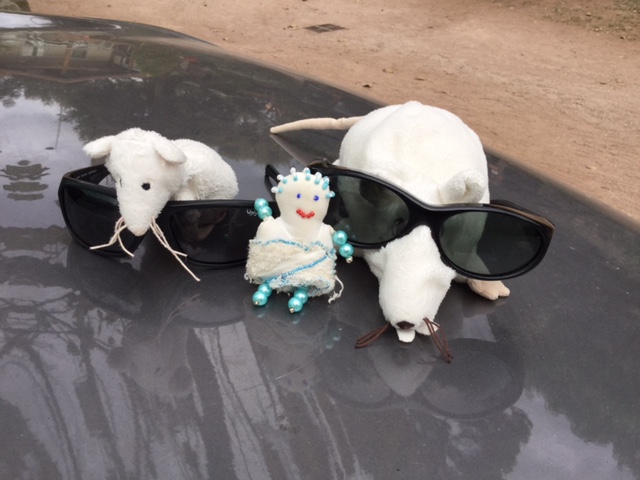 We all went sailing on Titisee a lake in the southern Black Forest in Baden-Wurttember in Germany. It is a large natural lake and so pretty with absolutely stunning surroundings and mountain views. It was formed by the Feldberg glacier. How cool is that? There is a lot of visitors to this part of the world as it is a spa town with healing waters. We read in the local travel guide (please click on this link to view the Ultimate Travel Guide) book that the lake freezes over in winter. Thanks holy mackerel that we are out of here by then. I could imagine though that it would look spectacular and dazzling. Reading this unique travel guide brought me back to child hood when I went ice skating on the frozen creeks in the nearby park in my hometown. Such great fun and we were racing each others. 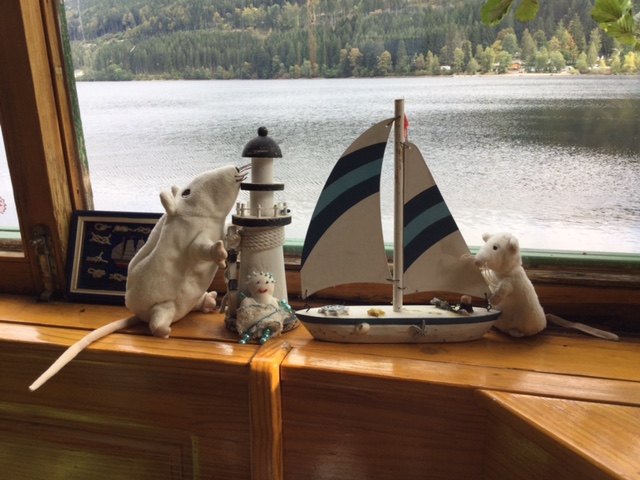 We visited a few” Little Free Libraries” (which is a non profit organisation that inspires a love of reading, builds community, and sparks creativity by nurturing neighbourhood book exchanges around the world). We did not have any books to exchange but we did have a good look to see what was on the shelves. The library in this photo is from Bastia a French commune in the north-east part of the island of Corsica. Millions of books are exchanged through the Little Free Library every year and having these small libraries scattered around the place mean that a lot of people get easy access to read. Guess how lucky we are? We have a Little Free Library in Dimbulah launched in June 2017. It is set up at the Eureka Creek rest area where heaps of travellers call in such as “Grey Nomads”, backpackers and Gypsies like Peder and me. 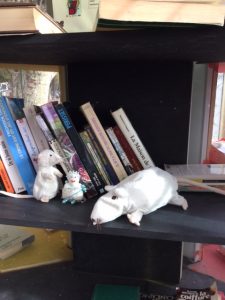 The Rats and Tommelise love reading and keeping up with the news in the world as well as the local gossip. They read my Who Flung Dung newsletter which is about biodynamic agriculture and they are indeed intrigued by the movements of the planets and their influences on the plants, animals, humans and the soil. They think it is cool to ferment cow manure in cow horns and then sprinkle it on the ground to wake up the residential worms and microbes. 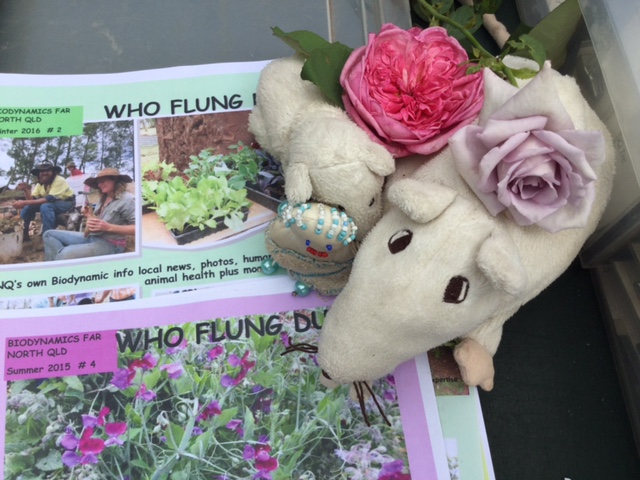 We often go out for a cappuccino and of cause they do not sit at the table but on the table. They love being out and about. Sometimes you are not allowed into pubs and restaurants if you have animals in tow. Even at home there is a restaurant where kids are not allowed. How fun is that? Since the Rats and Tommelise are so well behaved creatures they are most welcome anywhere and anytime.

The favourite outing for the Rats and Tommelise are the trips to the beach. They love making rock tower piles by putting one rock on top of the other. Other times they enjoy great surf or just swimming with kids in calm waters.

Rats are extremely intelligent member of the rodent family. Rats make fantastic pets and are considered to be as smart as dogs. I did not know that. They can learn their name and various tricks if their owner takes the time to teach them. I did not know that. However, right now I just remember the Danish “King of Rats”. His name was Cibrino and he was a street entertainer like a busker. He had trained his rats to do special tricks such as walk the tightrope, jump through loops and push a doll’s pram. I remember him from my hometown. He was good fun and he just loved his rats to bits and kissed every one of them after each performance. That’s how he kept them clean and tidy. Cibrino died in 2009. Just wondering what happened to his rats! Maybe they are the ones living with us? It could very well be as they are extremely sociable and have bonded closely to their human owner.