When I was a child I was intrigued by the kaleidoscope. I was given a kaleidoscope when I turned seven. I could sit for hours and just turn this cylinder around and around and forever create new colourful patterns. I thought it was magic.

Later at school I was taught how to make one and my universe unfolded and revealed yet another dimension. Inside the cylinder which had three mirrors put together in a triangle we put loose colourful objects such as beads, plastic bits and pieces and broken glass. We found amber at the beach and added it to the collection of objects.

Make your own kaleidoscope and look into the cylinder and with the light entering from the other end and as you turn the cylinder beautiful symmetrical patterns are created, due to the reflections in the triangle mirrors.

My I-Pad has some special photo settings one of them being “Kaleidoscope”. 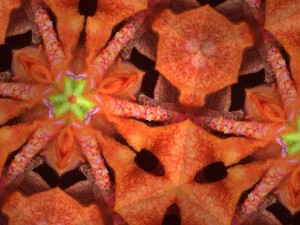 To impress myself and friends alike I decided to shoot a few “Kaleidoscope” photos of my Wonky Vessel textile exhibition.  Have a look for yourself. 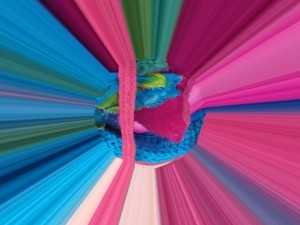 My I-Pad has also got a “Tunnel light” setting so I shot a few more photos.